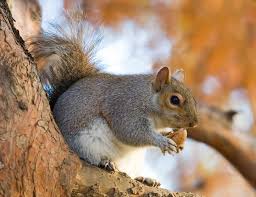 It’s not uncommon to see a squirrel in your Florida backyard. In fact, many homeowners just let them be and wait for them to leave. However, if you have a pretty nice tree in your property where these squirrels can get comfortable, it’s likely they won’t ever leave. And it isn’t even uncommon for them to breed right in your backyard, even worse, if they find safety and comfort in your attic.

Thanks to animated films like The Nut Job and Ice Age, humans have started considering squirrels as lovable and adorable. Spongebob’s friend Sandy Cheeks even prove how squirrels can become so smart and friendly. But the truth is — squirrels are rodents. Yes, they are close relatives of one of the most dreaded pests in the world — rats.

To know more about these critters, here are some quick squirrel facts that you might want to know about:

Florida is home to three species of squirrels:

You might be thinking twice about calling pest or animal control when you chance upon a squirrel inside your home or in your backyard. They can give you that extremely charming look in their eyes that makes them seem totally harmless. But they’re not. Unless you’re some wild animal professional, it is best not to handle squirrels on your own.

If you’re still unconvinced, here are some facts about squirrels that prove they’re not so adorable after all.

1. Squirrels can get quite large.

Squirrels are especially cute and adorable when they’re babies. However, they can get quite large as a full grown adult. When they’re larger, they would be more difficult to handle and control without the assistance of a professional. The size of a squirrel ranges from 8 to 20 inches. It can weigh only up to 1.5 lbs.

2. Squirrels make creepy sounds and can get really noisy.

Squirrels communicate with each other, but they also make sounds even when they’re all alone. Not a dog’s bark but quite similar to bird sounds, a squirrel can chatter and screech loudly, they would annoy you.

3. Squirrels have teeth that they can use to bite you.

The teeth of squirrels never stop growing. They file their teeth down by chewing and gnawing non-stop.

Even a pet dog would bite when provoked, so don’t expect anything less from a wild animal like a squirrel. Squirrels can look cute so humans are inclined to pet them or come near them. While they’re not really aggressive, they can bite you when they feel threatened. If you use your hands to feed them, they can also bite your fingers accidentally. And yes, their bites may carry diseases.

4. Squirrels are quite deceptive.

They probably won’t deceive you because as a human being, you know better. But squirrels love deceiving other animals. For instance, when they find food and they feel like other animals would steal it from them, they would dig up a hole and cover it with leaves. They would pretend they left the food there when in fact, the food is just in its mouth.

5. Squirrels can damage your home and cause house fires.

They won’t let you catch them indoors but when they find an entrance to your empty house, they could wreak havoc in the attic or in the kitchen. The constant need to chew and gnaw could result in holes in wooden doors and other furniture. Even worse, they could chew on electrical wiring and may cause a house fire.

6. When provoked, a squirrel could harm your pets, including cats and dogs.

Squirrels are generally kind animals. They’re not really aggressive. But cats and dogs would want to protect you and your home from them, or would simply like to play with them. When your pets do this, a squirrel would fight back. This scuffle could end with scratches and bites, which would eventually send your pet to the vet, and give you quite a hefty vet bill to pay.

7. When raised in captivity, a squirrel probably won’t survive if released back to the wild.

In most places, it is illegal to keep a squirrel as a pet. If you really want to do so, ask a local animal center so you could secure a permit. But if you change your mind or if you do want to keep them only for a while, perhaps you wanted to be a good Samaritan and raise an orphaned baby squirrel by yourself, you may end up not really helping the squirrel. When released back to the wild, a squirrel would probably not live long enough without the survival skills required — unless you actually take the extra effort to teach them how to do it.

8. Squirrels can carry diseases that may be transferred to you or your pets.

Just like many other wild animals and other rodent species, squirrels may carry diseases too. They can transfer these diseases to your pets or even to you. It is highly possible for squirrels to carry rabies, leptospirosis and Lyme Disease.

So now that you know that they’re not as amazing and adorable as you expect them to be, it’s best not to leave these critters around your property. Even worse, when you find one in your attic, call professional animal handlers right away. If you need expert assistance in squirrel removal, call Animal Wildlife Trappers at 352-267-0546. We service areas around Orlando including Lake County, Marion County, Hardee County and Sumter County and surrounding communities. Call us for a free estimate!

WE ARE STILL OPEN FOR BUSINESS!

Due to the nature of our industry and the services we provide; The Department of Homeland Security has listed pest control operators as Essential Critical Infrastructure Workers. This allows us to continue to service your wildlife emergencies as needed.

While we continue to operate, we do understand our role in helping to fight prevent the spread of the COVID-19 virus. Rest assured, our professional technician is taking the necessary steps to keep you and your family safe. Gloves, masks and sanitizer are provided to all employees and are being worn when needed. Our staff are washing hands between appointments, as well as following the social distancing guidelines outlined by the government in order to stop the spread.

PLEASE NOTE: MANY OF OUR SERVICES ARE PROVIDED FROM THE EXTERIOR OF THE HOME. PLEASE CONTACT US TODAY TO SCHEDULE YOUR FREE INSPECTION.